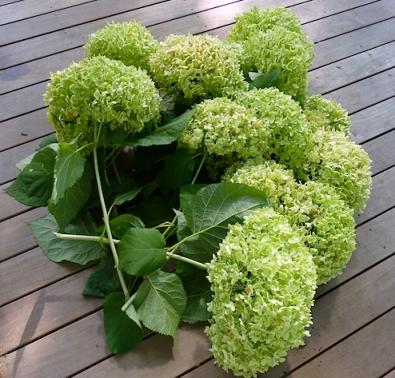 Despite my self-proclaimed garden ennui, I have been spending a little time in the past few weeks tidying up around my yard, trying to tame some of the wild late summer growth. As part of those efforts, I cut back some of my Hydrangea “Annabelle’. (This variety can take heavy pruning, or not – for more info look here.)

Rather than throw these cut stems out, or put them in water, I decided to try drying them.

I took an old copper planter, taped a grid  with floral tape to support the blooms. After stripping off the leaves, I dropped the stems in and stepped back, satistified, but uncertain of how they would look once dried.

Turns out, they look great, almost identical (see photo below). I’m not sure if this qualifies as a craft project, or a gardening project, but either way it was entirely satisfying.

Fresh cut hydrangeas, drying in the fireplace on the left. Three weeks later, fully dried, on the right.

2 thoughts on “One way to dry Hydrangeas”