When I started this blog, my plan was to stick with a narrow focus – creative projects and inspiration. But now, a few years later, things are different.

I’ve started a small business and a lot of my creative energy is going into that – keeping my online shop fresh, coming up with new cards and prints, and best of all, keeping interesting plants in my garden so I always have fresh botanical inspiration. Aside from my garden, those other creative endeavours don’t lend themselves to thoughtful blog posts, and besides, they have their own little space on the internet.

So, I’ve decided to open up this space a little, and post about other topics, and today, I’d like to share a little about my recent family trip to Scotland. I’d be honored if you’d stick around – there are landscapes, castles, and, of course, gardens and plants.

With a home base in Stirling, we were in the thick of some of big moments in Scottish history, including the Battle of Bannockburn where Robert Bruce defeated King Edward II of England in 1314, and the Battle of Stirling Bridge, which was woefully misrepresented in the movie Braveheart as we learned more than once.  With boys in tow, we visited both sites, of course! 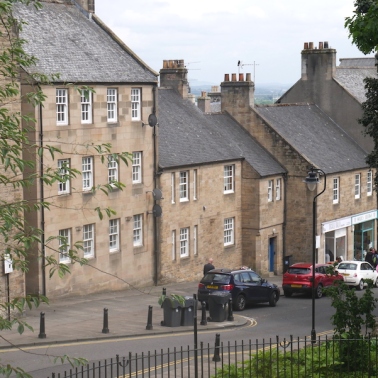 streets of Stirling… uphill to the castle! 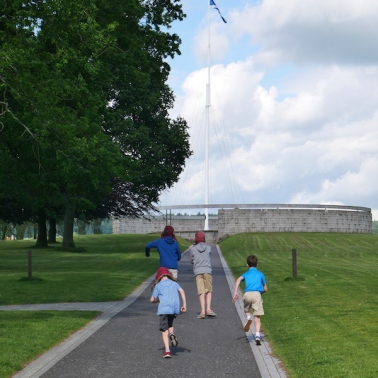 running to the monument at Bannockburn

We also regularly enjoyed the dramatic views of Stirling castle and the highland cows grazing beneath it. Sadly, I did not get a good photo of the castle which is quite dramatic in the landscape, perched high up on a crags. (Its easy to find one online.)

Dating mostly from the 15th and 16th centuries, Stirling castle served at royal residence to James IV, V, VI of Scotland. Mary, Queen of Scots, was crowned there and Bonnie Prince Charlie beseiged it. (Not exactly in that order, of course!) So I’ll stop there – having me try to recount Scottish history will do none of us any good. Suffice it to say that Stiring castle played a key role in much of Scottish history, and it was a delight to explore; my boys spent a lot of time discussing paraphets, keeps and murder holes.

We also visited the museum of the Argyll and Sutherland Highlanders within Stirling castle. They could have easily landed one new recruit, but for the barrier of his being only ten years old, and a US citizen.

We also took several day trips, visiting St. Andrews, Falkland Palace and Garden, and the Royal Botanic Garden in Edinburgh, among other places. Stay tuned, if you want to hear more … I’ll be posting those later in the week.  In the meantime, here was my favorite personal discovery in our adventures in and around Stirling: wild woodland foxgloves growing along the path to the Wallace monument.

Mostly, I'm on Instagram, I'd love to connect with you there!